A Victorianesque Hallowe'en: The Dressform and Coatrack 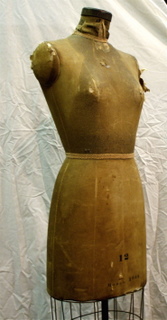 I realize I have said other ideas are easy. Well, this one is, too, especially for
anyone who has a coatrack (or tree) standing around somewhere collecting dust. Those
with dressforms seldom allow them to collect dust, and I will bet they already
understand the spooky, haunted Victorianesque home theme forming here.


Now when I speak of a coatrack or coat tree, I am not referring to a lovely
sideboard-type bit of furniture usually called a halltree. Halltrees are last minute
dressing and once-over stations with coat hooks, usually a mirror for checking one's
hair, tie, make up, etc. just before stepping out the front door. Many also do
double-duty as umbrella stands or even small benches for slipping snow boots on and
off. Functional though they may be, they will not work for this. The piece of
furniture I refer to is a free-standing "tree" often five or six feet tall with a
ring of hooks to hold coats, scarves and hats on all sides. Now this will work.

The idea is to create a background prop reminiscent of that old attic movie scene
where great-grandma's wedding dress is reflected in an old dusty mirror, scaring the
wits out of anyone coming up the stairs not expecting it to be there. Get a glimpse
of the picture?

Let's begin with the dress form. Having grown up in a house full of antiques, one of
my least favourite was the old dressmaker's mannequin, or dressform, stored standing
in the rafters of our family's detached garage. One would swear the garage was as
large as the house, and the rafters were open with little more than old doors lain
across the trusses to provide spots to store old things. The dressform had been
placed standing just under the highest spot at the center of the trusses. Three small
windows let very little light into the garage and unless one was brave enough to
sprint for the hanging string that turned on the only bare bulb light in the
building, they were faced with the barely discernable silhouette of a headless
feminine figure staring down at them like a displeased, haunting governess.

Many years later I would bring her (yes, I referred to the form as "her") into the
house to use for a project. I had died a dress and made a veil for a friend's
Hallowe'en costume and needed the form to attach a lace sash to the dress. Once
finished, I placed the veil at the top of the form, where the head should be. What
did not occur to me was that "she" was standing in front of mirrors. The three days
until my friend picked up the costume were an ongoing series of comical
misunderstandings as kinderspawn, elderly mother and guests all, at one point or
another, were a little more than startled by the headless "bride" lurking in the
corner. Alas, the dressform is no longer with us. Having accidentally been left just
inside an open window in the garage during storm season, she became warped and ruined beyond repair. Part of me misses her now.

So for those with dressmaker's forms, I have to say, these are the simplest
Hallowe'en props on earth to use. Old prom, wedding or formal gowns work wonderfully. The more layers, the better. Light fabrics like tulle and sheer silks, even rayons, will drape to the floor softly and give the illusion of a floating figure. You can even use a simple length of three or four yards of soft fabric is ivory or black. Fold it in half lengthwise and drape over the top of the dressform at the fold
allowing the ends to hang to the floor. Using a strip of similar fabric, wide lace or curtain cording, secure the fabric at the waist like a sash or belt. Placing a veil, an old hat or a length of fabric even more sheer than the first at the top of the form adds to the effect.

The coat/hat tree will serve a similar purpose, but without the feminine form. Being
taller, it allows for the use of different ideas, preferably using the same
combination of draping fabrics and hats or other headwear toward the top. A shawl
draped over a hook beside a length of soft fabric, or a cloak create a bit of an
imposing figure.

Place either (or both, if you have them) pieces in an area that will be just slightly
out of regular eyeshot and in a degree of shadow. Back corners and rooms not often
used are ideal for this. These are the rooms that most do not pay much attention to
because they are just off of a main room that is the primary gathering spot. They
aren't often lit and are full of shadows. A door is usually open, unless they are
accessed through an archway, but again, they go more or less unnoticed. That makes
them perfect. Once your billowy figure is put together, place them toward the back of
the room with any view of them only barely obstructed. Using a small fan, placed just
out of sight, set at medium for layered fabrics and low for light ones or single
layers. With oscillating fans, you can let it move to blow against the "skirts" from
different angels, or set on still, aimed against the wall where your figure stands.
This will cause a ricochet of air against the fabrics causing them to billow forward
toward witnesses. Now find a spot for a hidden soft light. Spot lights are too
obvious and will reveal your ruse. Soft lighting across the room from your figure
will illuminate the front just enough for the motion of the fabric to catch a
witness's glimpse just out of the corner of their eye. And that is the idea.

So off with you now. Go haunting, and say hello to your dressmaker's forms and
coatrack figures for me. I am off to untangle the oldest from stringlights. Again.

Be Chic, Be Spooky, Be Victorianesque.